Sharing Asian and Pacific Islander Heritage: 'It's Pride In Who We Are'

May is Asian American Pacific Islander Heritage Month, a designated time to celebrate a rich and diverse heritage. Fernando Nucum, whose parents came to America from the Philippines decades ago, approaches every month as a time to celebrate and share his heritage.

Nucum, a regulatory implementation consulting manager with Health Care Service Corporation (HCSC), first joined an Asian American organization at the University of Illinois at Chicago and served as a member of its board.

“Being actively involved in the community has allowed me to establish great relationships through the years,” Nucum says.

When Nucum came to HCSC in 2014, he joined the Asian American Business Resource Group (AABRG). AABRG is an employee-driven group that promotes community wellness and fosters a diverse work environment. Nucum is now chair of the Illinois chapter.

“When I think about the AABRG, it’s pride in who we are,” he says. “AABRG has not only been a critical part of my career, but also my passion.”

AABRG holds events for its members and extends its reach to all HCSC employees, of whom 10% are Asian American. 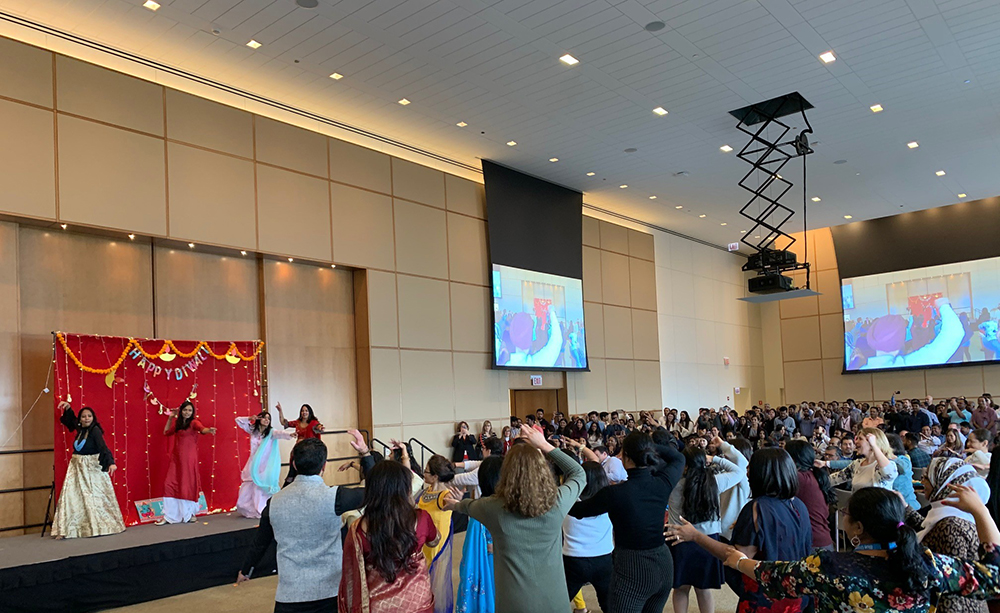 HCSC employees participate in a Diwali celebration in 2019.

In a pre-pandemic world, one of the best attended AABRG events was the Diwali showcase at the Chicago headquarters.

Diwali, also known as the festival of lights, is celebrated in the fall by people of several faiths, including Hindus and Sikhs.

“We were anticipating 300 and 650 showed up,” Nucum says with a laugh. “A very diverse group attended because they wanted to experience the culture, food, and traditions of India.”

AABRG pivoted its programming to a virtual format as a result of COVID-19. The pandemic also coincided with a surge in anti-Asian hate crimes in the U.S., which has taken an emotional toll on the Asian American community across the country, including at HCSC.

“A lot of the issues surrounding inequality that are happening right now impact many of us,” Nucum says. “It’s crucial for us to come together and support each other.”

Beyond offering group members a support system, AABRG is also reaching out to other groups within HCSC to reinforce the importance of embracing diversity.

AABRG is holding several virtual events in that spirit. For instance, a cultural exchange with HCSC’s Latinos for Advancement BRG will encourage attendees to talk about the importance of family, food and other aspects of their cultures to find similarities while embracing the differences.

“The more we’re able to learn about each other and the strengths we share, personally and professionally, everyone benefits across the board,” Nucum says. “At the end of the day, diversity, equity and inclusion of all ethnicities and cultural backgrounds bring us together.”